Inexpensive, yet loaded with features, the HS200 is a suitable drone for beginners. The drone comes pre-assembled and packaged with a controller, a phone holder, a 3.7V 650mAH LiPo battery, USB battery charger and an SD card reader along with a 4gb micro SD card.

A neat feature of this drone is the ability to use real-time FPV(first person view) streaming on your phone using the drone-mounted camera and its self-generated Wi-Fi (you need to download the interfacing app from the IOS or Play store), which records videos at 720p. The app also allows you to use your phone’s motion control to control the drone. It also features a one button landing/ takeoff feature, as well as an altitude control function. The drone also comes with a preloaded 4-speed control feature. The drone is also able to fly headless, i.e. regardless of where the drone is facing, it will move in the direction you want it to. The drone also features a one key return home button. The flight time is approximately 7 to 9 minutes, with an operating range of about 120 meters, with a video transmitting range of 50 feet max.

The one key return home button is a unique feature that allows you to prevent your drone from flying outside the operating range. The camera while not exceptional is actually quite good and is able to zoom in significantly. The drone also comes equipped with LED navigation lights, so you can fly the drone at night as well. The customer service provided by Holy Stone is second to none.

They quickly responded to all my queries and resolved the issues very quickly. The battery is also very easy to charge, unlike some other drones, you don’t need to remove the battery for charging because the battery charger comes with a USB port. The altitude hold feature allows you to hover in one place, or fly at a fixed height, which can be useful in avoiding trees and other things. A built in 6 axis gyro stabilizer allows to drone to position its fuselage properly so as to capture better videos.

Also, it allows you to select up to 4 speeds which is handy when you want to fly the drone indoors for some practice.

The app has a propensity to crash, which can prove disastrous if you’re trying to land the drone using the one button landing. The buttons suddenly stop functioning sometimes, and this can prove to be annoying or even costly. The light weight of the drone makes it unsuitable for flights in even moderately strong winds. Another issue is that the app makes no indication of the battery charge, which means it is up to you to take care of how long you can fly this thing before it stalls and crashes. Also, changing out the battery is quite difficult due to where it’s located.

An inexpensive drone with a myriad of features, along with phenomenal customer service. This is a great drone to practice on while indoors. At a price lower than $100 this is a perfect starter drone with some great features to help newbies get familiar with flying drones. 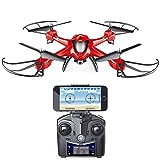 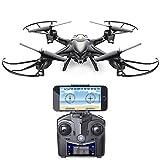 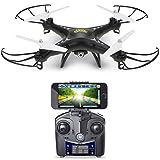