The CES in Las Vegas this year was amazing. If you didn’t get the chance to go, then you really missed out on a good one. That’s okay though, because if you’re interested in the drones that were introduced, you’re in luck because that’s exactly what I paid attention to and today I am going to tell you about a drone that comes from GDU Technology, which is a popular Chinese based drone company.

The DGU 02 Plus is foldable, compact, 4k capable, and it has features that have never been seen before.

Features that have Never Been Seen Before

Surely you’re interested in the features that have never been seen before, so I’m going to tell you about those in the very beginning.

The GDU 02 Plus is the first drone that is capable of shooting videos in time-lapse and slow motion, without requiring any form of additional editing.

This is also the first drone to have it so that the propellers and the arms slide out directly from the main body. In order to insurance durability, the arms are fortified with aviation aluminum alloy, so it’s light in weight.

It comes with a separate remote controller, which is something that many drones come with, right? Well, with this one, the controlled can be latched underneath the drone in order to add additional portability. That’s right, the drone folds together with the controller all in one nice package (it looks a lot like a brick) in order to make it easy to carry around with you.

The GDU 02 Plus offers 20 minutes of flight on a single charge. If you plan on using the drone for a longer period of time, you can bring an extra set of batteries along with you.

The drone is super light, weighing in at only 1.56 pounds. As you’re carrying it around, you’ll probably forget it’s even there because it’s so light.

This drone is capable of flying as fast as 33.6 miles per hour. It may not seem like 33.6 mph is fast, but once it’s up in the air and going at that speed, it’ll certainly look fast. Along with the speed, it also has the capabilities of vertically climbing up to 11.2 mph.

The drone is equipped with a GPS, obstacle avoidance and GLONASS. It also has safety features that are similar to a DJI Mavic.

The GDU 02 Plus is capable of connecting up to 20 GPS satellites, so you can rest with the satisfaction of knowing the flight is going to be precise.

It has an onboard Qualcomm 801 Snapdragon processor, so the images will be high quality.

Images can be instantly shared to all of your friends on social media through the app.

If you’re looking for a good drone that is easy to carry around and can take good pictures and video, then the GDU 02 Plus may be suitable for you. The GDU 02 is set to be available to the public sometime in October.

Drone FAA 107 2021 – 2022 License Study Guide With Test Questions and Answers: A Simplified Guide to ace your 107 Test at First Sitting and Obtain Your License
$3.99
Check Current Price on Amazon
Best Selling Drone No. 4 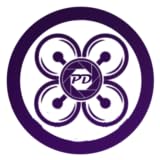